In late 2018 our tooling expert in our Kulai, Malaysia plant, Baktha Durairaj, volunteered to develop a process to speed up the manufacture of prototype tooling.  The result that he achieved was beyond our expectations.  In our first project using his new system he led a team that managed four tools which included two over mould tools from receipt of CAD from the customer to delivery of first off sample to Sydney Australia in 14 days.

This is the story of how he and his team achieved such a remarkable achievement.

During a Senior Management Team meeting the topic of rapid prototype tooling was raised and Baktha, who had obviously been considering this for a long time was quick to put his hand up to volunteer to develop a system that would minimise lead times.  He formed a team which included experts in toolmaking, molding and process engineering from both our Kulai and Sydney plants.

The team considered all of the variables that contribute to the lead time for a rapid prototype tool including location of the supplier, location of trials, time to ship tools, the effect of location on modifications, the performance history of current suppliers, risk of engaging a new supplier and many other issues.

They determined that using a supplier or suppliers local to our Kulai, Malaysia plant provided the most benefits and least risk.

Baktha was now faced with the task of convincing a supplier that by modifying their process management systems and taking a positive attitude they can make tools really, really quickly.
The team created a Gantt Chart of the processes required in the build of a tool and considered the links between each.  Their intimate knowledge of the processes allowed them to slash times by challenging industry norms.  Traditionally, dependant processes are not started until the previous process is completed.  In each stage some room is left to allow for unexpected delays or complications.  The team’s model started dependent processes as soon as previous process had progressed far enough to be able to do so.  It shortens the process time line but does not take short cuts.
The time allocated for unexpected delays is removed.  Close supervision of all processes ensures that these aren’t required.

Baktha approached several of our preferred suppliers with the modified process plan and one showed particular interest.  They worked together to sort out the concerns and risks and agreed that it was worth testing.

Not long after, a project offered us the opportunity to put the plan into action.

The project required 4 prototype tools to produce 2 over moulded parts with total production not exceeding a few thousand parts.
After a close examination of the part models, our project team and the supplier proposed that we quote three weeks to delivery of sample parts from the time that we receive final CAD models.
The customer was delighted with the proposal and quickly provided a purchase order and CAD models followed soon after.

Baktha led the preparation of design for manufacture reports (DFMs), which were submitted and returned to us with the customer’s feedback.

DFM’s typically include MoldFlow simulation which predicts the injection molding process and allows design changes to the part, prior to cutting metal, to maximise product quality. 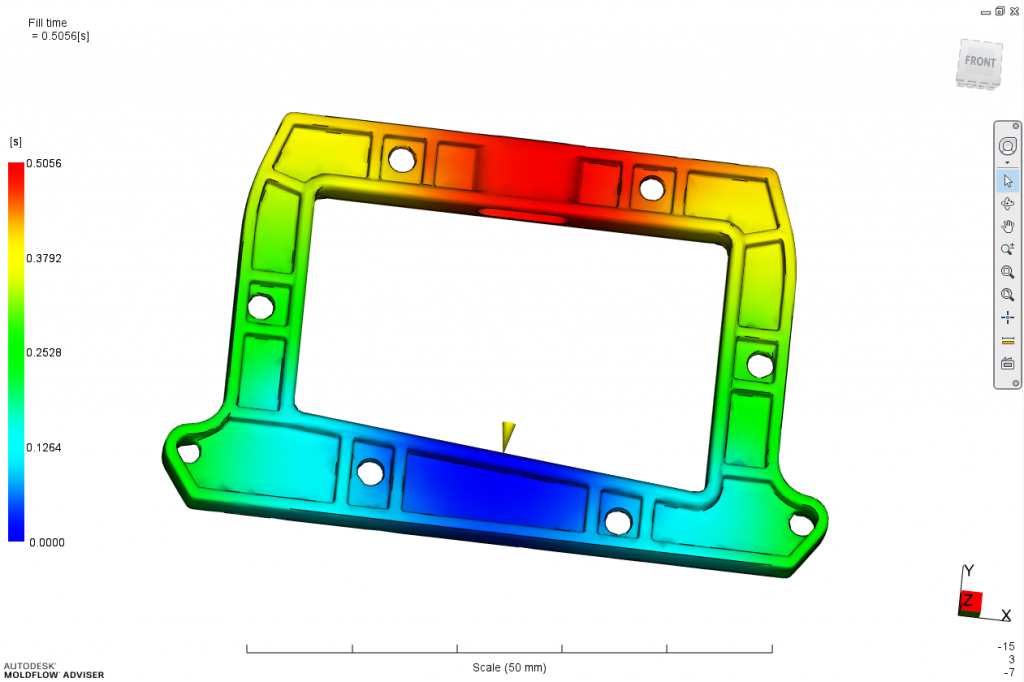 The DFM cycle repeated several times as the part designs were refined to achieve both the design intent and improve the injection moulding characteristics of the part.

The approval of DFM and receipt of final approved CAD triggered the start of the manufacture of the tools and with this, the clock started ticking.
Each tool was to be 3 plate, without side slides and with a cold runner system.  Cooling, ejection and gate positions were designed to be suitable for use in the final production tool.  This practice permits the assessment of these elements of the tool design.

The criteria for prototype tool material selection differs from those of production tools.  They typically include cost and, ease and speed of the machining processes.  As a part’s surface finish becomes important and the volume of parts required increases, the material choices move towards those that offer improved wear resistance and impact resistance.

Our process requires that a prototype tool is built to meet the design requirement beyond the minimum number of trial parts to permit further modifications and, as is often required, initial production.

Steel and other materials are ordered immediately upon receipt of the DFM approval and the supplier receives these while they are finalising the tool design and writing programs for machining.

Baktha, or one the team, visited the toolmaker every day during the build and in accordance with their original plan completed all four tools in 12 days.  Working Saturdays ensured that the tools took exactly two calendar weeks from receipt of CAD to moulding of samples.

One of our Sydney team was in Malaysia for the trial and was able to personally courier the samples back to Sydney for delivery to the customer.

We delivered sample parts to our customer 1 week earlier than promised and our customer they were thrilled.  Twelve days from CAD to molding samples from 4 tools and personal overnight delivery from Malaysia to Sydney.

Click here or on the image below for a PDF copy of this article. 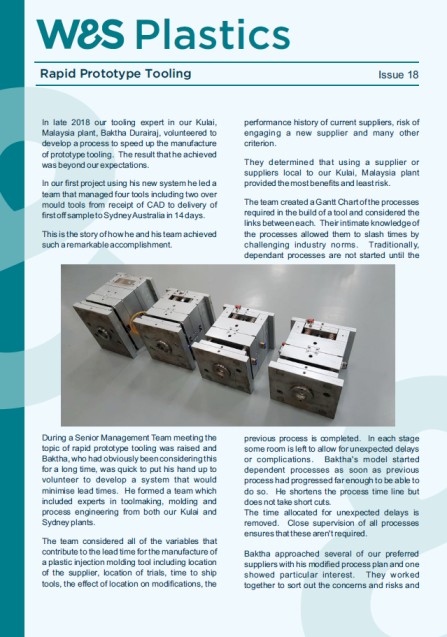